This book review of Who Moved My Cheese first appeared on my previous blog back in 2014. I offer it here because a classic work does not grow old; it is “news that stays news”.

Book Review of Who Moved My Cheese

Who Moved My Cheese? An Amazing Way to Deal with Change in Your Work and in Your Life was first published in 1998. It quickly became a bestseller in the USA and around the world. It has been translated into 37 different languages, including Japanese.

I first heard of the book when I returned to Japan in 1999.

In those days, Who Moved My Cheese? was very popular in Japan. A bookshop chain called Kinokuniya sold the English and Japanese editions as a double-volume set. That had never happened with any other book before.

I took little notice of Who Moved My Cheese? back then, even though my Japanese girlfriend bought the English version.

After more than a decade of marriage, the book resurfaced in 2014. It looked yellower than before, rather like a slice of stale cheddar. Over the years, I had become very interested in the topic of “change.” So in 2014 I picked it up and read it with interest and enjoyment.

Suddenly, Who Moved My Cheese? struck a chord with me. Obviously, I had changed a lot over the previous 15 years. Starting an online business was the impetus for much of the change I experienced in myself and my life.

What Is Who Moved My Cheese? About?

Who Moved My Cheese? is a kind of business parable. It seeks to help people understand and deal with “change” in their life and work. 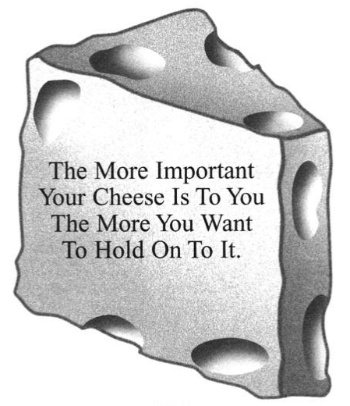 It is just 96 pages long, written in simple English, with a large font. Fifteen of the pages are illustrated with drawings of cheese. The cheeses have simple statements in bold font on them that sum up the key points that have just been made by the narrative. In short, it is a quick and easy read. You could probably get through the whole book in an hour.

The book is divided into three parts. In the first part some school friends meet for lunch after attending a reunion party. They talk about how things have changed in their lives since they were at school. One friend, Michael, talks about how a “funny little story” caused him to change the way he looked at “change.” That sets us up for the story, which Michael then narrates to the group.

A Fairy Tale Of Mice And Men

Once, long ago in a land far away, there lived four little characters who ran through a maze looking for cheese to nourish them and make them happy.

Two are mice, named “Sniff” and “Scurry” and two are mice-sized people called “Hem” and “Haw.”

They have all got used to finding a fresh supply of cheese at “Cheese Station C” every morning. Then, one day, there is no cheese there when they arrive.

Sniff and Scurry immediately run off into the maze to find new cheese. Hem and Haw stay in the same place, complaining and attempting to “analyse” the situation. They only succeed in getting frustrated, angry – and hungry.

Eventually, Haw imagines himself finding new cheese. He realizes that he has to go back into the maze, like the mice have done, to find new cheese. Importantly, Haw learns to laugh at himself and his fear of change.

However, Hem refuses to change or search for new cheese. So Haw ventures into the maze alone.

Learning To Deal With Change

As Haw goes through the maze he learns about the value of “change.” He draws pictures of cheese on the walls of the maze.  Inside each “cheese” he writes down an insight or two, based on his own experience. Haw hopes they will help Hem if he follows. The first one reads,

If You Do Not Change You Can Become Extinct.

Haw is afraid of change, but he understands that he has to change to survive. Then he draws another cheese and writes inside it,

What Would You Do If You Weren’t Afraid?

Eventually Haw finds the two mice enjoying a new supply of cheese at “Cheese Station N.” Now he understands that “there is always new cheese out there.” So it is important to

Move With The Cheese And Enjoy It!

In the third part of the book the friends meet up to discuss the story. Here, Dr Spencer Johnson illustrates some of the possible applications of the story.

The friends discuss changes in business. They agree that a lot of people do not admit that they fear change, even as they resist change.

Next, they talk about how success can lead to arrogance, which causes people to ignore the need for change.

Then they talk about applying the story to their personal lives and family relationships.

Finally, they consider whether to drop “bad relationships” or create change by changing their behaviour in the relationship.

Conclusion To My Book Review of Who Moved My Cheese

Who Moved My Cheese? is a quick and easy but thought-provoking book. Change is inevitable both in your life and your business. The parable of searching for “new cheese” may help you look at those changes more positively.

If you enjoyed my book review of Who Moved My Cheese, post a comment below and I will respond.