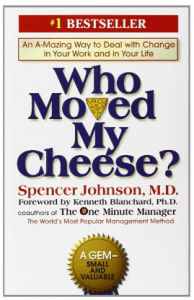 And it got me thinking.

It reminded me how often Internet marketers experience periods of intense excitement and sudden change.

During such times, confusion reigns. People panic at the thought of losing profits, and usually all hell breaks loose.

Those who’re caught by surprise often spend the next few months complaining and licking their wounds. Others go to the extremes of spending even more money trying to recover whatever they lost.

But amidst the chaos, savvy marketers hedge their positions and keep their eyes open. Like sniff and scurry, the two mice in the fable. Unlike Hem and Haw, Sniff and Scurry are constantly sniffing for new cheese and ready to run after it. Likewise, savvy Internet marketers are always ready to snap up genuine opportunities as they arise.

Sit Back & Enjoy The Who Moved My Cheese Video

If you struggle to adapt when things go wrong, watch this 15 minute Who Moved My Cheese Video. It perfectly illustrates the consequences of not embracing change, especially if you work online.

This is stuff that we all experience, or have experienced online at some point. Here are two examples of similar things that I experienced either directly or indirectly.

If you’ve been following my blogs, you’ll have noticed that HomeBizWeekly.com shut down rather suddenly. Thanks to a bad hosting service, HBW was hacked. I needlessly lost years of content. My readers were left wondering what had happened.

I could have tried to recover my blog, but I quickly realized that it would be a futile exercise. It was going to take a miracle for me to get my data files restored. Also, things change quickly on the Internet and a lot of the content was already out of date.

So, I figured that was a clear signal for me move on and start something new.

Moreover, it was a chance to redirect my business towards my most important goals. Yes, it meant a lot of work to get a new, improved blog up and running. But the idea of a fresh start was a lot more attractive than recovering the old site.

And so, Top5Programs.com was born! The result is that I feel more focused and energized than ever before.

In 2014 revenue sharing advertising programs such as MAP and Traffic Monsoon ruled the roost. Then 2015 to 2016 became open season for all kinds of rev-share programs.

At the height of the madness, people were throwing money into ‘get rich quick’ rev-shares which promised unsustainable returns.

Then, in December 2015, PayPal stopped dealing with rev-shares and froze their assets for 180 days. That was the ultimate litmus test for the industry. Panic gripped members. They rushed to withdraw whatever earnings they could.

Shady revshare owners took advantage and split with some of the money. Others simply couldn’t recover after members’ withdrawal requests couldn’t be met.

Savvy marketers, however, had not thrown all their cash into individual rev-shares. They had hedged, diversified and set up a clear growth and withdrawal strategy. (I called it “the rachet” in one of my blog posts on HBW back in 2014.)

So, when the Paypal crisis hit, they were not caught off-guard. Instead, they surveyed the situation calmly and moved on.

Meanwhile, those who haven’t moved on are still posting useless demands for refunds. You can see their comments and complaints on failed revshare Facebook pages. You can read their screeds on scam-watch forums and blogs. But seriously, life is short, change is certain, and you  have better things to do with your time.

Change Is The Only Certainty (Apart From Death & Taxes)

As the Who Moved My Cheese video shows, change is the only certainty in business, apart from taxes.

So, if you want to avoid constant frustration, learn to anticipate change in all aspects of your business. Sadly, instead of anticipating change, most marketers only react to changes brought about by others.

Reacting is a state that occurs when you are caught unawares. And you know that when you’re surprised, you naturally run on adrenaline. Most likely, you won’t make the best decisions and your emotions (especially fear) simply take over.

The best way forward is to keep abreast of what’s happening in the market. The more you understand your environment, the better positioned you are to anticipate and prepare for change. If you anticipate change, you’ll be better equipped to deal with it and leverage its effects to your advantage.

Who Moved My Cheese Video #2: Amazon Kindle, A Case Study

To bring this point home to Internet marketers, here is a four minute Who Moved My Cheese video by One Percent Better. This one ties the theme of “Who Moved My Cheese?” directly to how Amazon recently changed their Kindle payment model. It is very instructive: