Here’s a dose of #entspresso from one of my online mentors, Evan Carmichael!

Evan publishes daily doses of entspresso inspiration every morning on his YouTube channel. 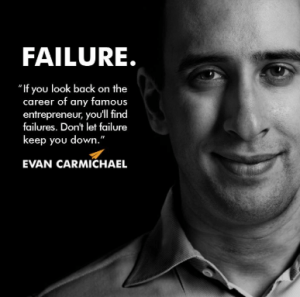 Evan’s put together a video inspired by Will Smith’s message,

Will Smith is an American actor, producer, rapper, and songwriter. According to Forbes he ranks as one of the top ten highest paid actors worldwide. As of 2016, his films have grossed $7.5 billion at the global box office.

Check out Evan’s #entspresso video on the benefits of “failure” here:

On the theme of “failure” Will Smith says,

I think most people have an unhealthy relationship with failure. I think people see failure as this really bad thing and I think most people are really afraid of failing in front of other people. That’s the ultimate judgement. You don’t want to be seen as somebody who IS a failure. But failure is only really failure if it’s final. Failure only really failure if you don’t learn anything from it.

All failure is, is a way to know that this thing that you tried didn’t work. That’s great learning. If you’re never failing you’re playing life so safe that you’ve never taken a risk.

The video also features some bonus insights into the value of “failure” by Tim Grover, Peter McKinnon, and Jay Shetty.

What has your attitude to the risk of failure been until now?

I’d welcome your comments below, and will post a reply.

Buy Our Books, Change Your Life

Some used the ideas in these books to build successful businesses. I’ll give you the simple-yet-powerful formula that they used (and you can) to realize your dreams. Get yours.

Evan Carmichael: Your One Word

David Hurley & Alex Nordach: How To Earn A Thousand A Month

If you want to build a profitable online business, you need to get the right training!

P. S. Learn how to build a successful online business with Wealthy Affiliate. Click the banner and sign up for your FREE training course PLUS two FREE WordPress blogs to get you started: